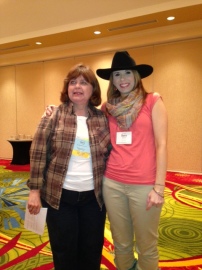 Convention was held in Chesapeake, VA and our members happily showed their Alice Kyle District Spirit.

This was also a chance to celebrate the accomplishments of 2012. Members of the Alice Kyle District actively volunteered in their communities, partnered with other civic organizations, and continued to support and promote GFWC Special Projects and Programs. Alice Kyle District members are strong in supporting their own clubs and sister clubs. The GFWC Signature Project: Domestic Violence Awareness and Prevention was supported through the planting of pinwheel gardens to raise awareness of Prevent Child Abuse Virginia. Clubs had guest speakers from C.A.S.A. to learn of ways to prevent abuse in their communities. One Junior Club joined the Christmas Mother to help 47 families and 84 children by providing food and gifts, with 15 members volunteering 300 hours with an In-kind donation of $500.00 to support the GFWC Junior’ Special Project: Advocates for Children. In Arts five clubs held an Arts and Crafts Contests, three clubs held Literary Contests, and six clubs made contributions to their local high schools. One club before their local Christmas parade built gingerbread houses with the children providing construction items, candy, frostings and so forth to create their gingerbread houses. Clubs were involved in Conservation Partnerships by supporting the Humane Society.

In Health clubs fielded Relay for Life, and Mental Health America of Central Virginia. Three clubs worked together hosting a Heart Healthy Tea to benefit a local community hospital. Clubs supported the American Red Cross, American Heart Association, Central Virginia Kidney Association, Camp Loud and Clear, Children’ Miracle Network and the Cerebral Palsy Foundation. The Heifer Project International, Operation Smile and U.S. Fund for UNICEF were supported Partnership programs by our club in International Outreach. Clubs packed 55 boxes for Operation Christmas Child. Clubs donated to Gleaming for the World, World Hunger Day and one club supported a local doctor who served in Africa through “Doctors without Borders”. Hearts were touched to assist Wounded Warriors and all veterans and their families with funds and gifts. Also members served as poll workers, sponsored forums to educate the public, presented candidates, and urged citizens to vote. These are only a few ways members were active on Public Issues.

Many clubs are active in Communications and Identity through Facebook, Club Newsletters, Local newspapers, Yearbooks and by wearing club shirts to identity and educate their community of club activities and missions. This district is fortunate to have its Leadership in the form of many mentors, with the task at hand to formulate new leaders. This is carried out through more clubs now having Co- Presidents, and having more information and interesting district meeting where as there is more participation of members. Clubs became more involved in Legislation and Public Policy by using information provided in GFWC Advocacy. Importance was placed on GFWC Resolutions to learn what they mean to members and how to advocate to our legislators. Clubs recruited through holding Teas, Show and Tell, taking trips, Membership Appreciation Dinner and many other ways to increase their Membership. One club was busy laying the ground work for the formation of a new Juniorette Club, through presentation to the county school board, school principals, and school administration. Clubs retain their members with Anniversary parties, membership pins, Talking Turkey and many other interesting events.

In the area of Women’s History and Resource Center one club re-did several of their scrapbooks that were housed at their local library, which had become too fragile to handle. Members enjoyed many events while Fundraising. Events such as Breakfast with Santa, Selling sandwiches at the opening of the Museum of the Confederacy, holding a Children Carnival, Brunswick Stews, and a Pancake Supper only to name a few. The members have joined together in contributing to their elected Alice Kyle District, GFWC Virginia State Conservation Project, Hat Creek Camp and Conferences. Clubs continue to have as their District Project, Patrick Henry Family Services and jointly donate a multitude of school supplies each year.

Welcome to the Alice Kyle District!

The Alice Kyle District one of eight districts in GFWC Virginia and encourages women in central and southern Virginia to become more involved in their community and live the volunteer spirit! We hope you find this page informative and check back for updates regarding our clubs and projects.